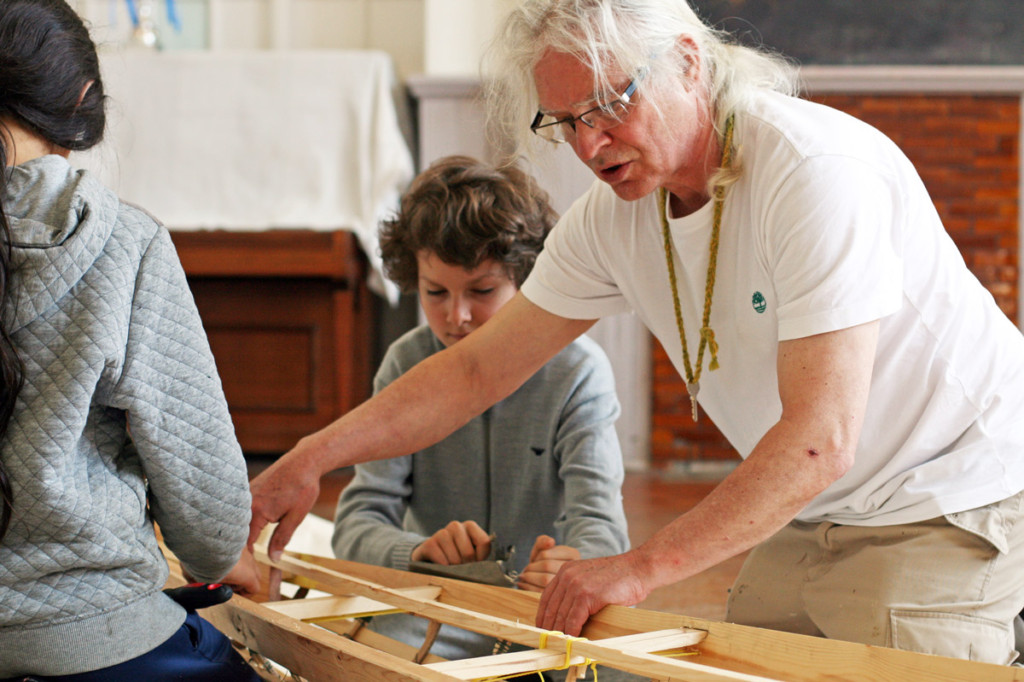 Mike teaches Woodwork to our Upper School students. He is an expert craftsman and a trained, qualified and practising Luthier (string instrument maker). Mike’s passion for woodcraft started at age 8/9, when he was trained by his father, a working craftsman, in instrument making. He has been making instruments as an independent Luthier for nearly 30 years.

Mike has a broad range of crafts skills alongside woodwork including stone carving, metal work and forging, ancient skin craft and boat-making. He has made coracles and traditional kayaks from different cultures and has previously worked with the British Museum to support the conservation of their kayak collection.

Mike is a born-story teller and deftly weaves story into projects with the children bringing learning alive. His project with Class 7/8 making a 20 foot, full-size reconstruction of an 1823 Inuit qajaq (kayak) was a wonderful living research project – connecting learning across all areas of our broad curriculum – from maths and the science of buoyancy, to history, ethnography, craft and literacy.

Mike has a natural affinity and alignment with the Steiner approach to learning and has a real eye for how to individually support and encourage each child.

Mike was a resident craftsman at the former Model House Craft and Design Centre in Llantrisant, and his work with children and young adults began from there. He has run workshops, outreach projects and educational activities in a broad range of crafts based activities, including work in and for schools.

His projects with children have included making ‘nail pianos’; murals; coracles and curraghs (one summer project culminated with floating fourteen coracles on a reservoir in the Brecon Beacons); a water driven musical instrument powered by a mountain stream; an Aleutian kayak with A level Design and Technology students; and a story telling circle with a ten foot totem pole.

Mike has a qualification in violin making from the Welsh College of Instrument Making and a BSC (Hons) in Music Technology. He has previously been a Technician and Lecturer for the University of Glamorgan, and spent 6 years at Merthyr College as a Lecturer.

Mike is also a practising musician, a career that has run alongside his craftwork, and he currently plays in several bands including a gypsy jazz band, writes and records his own music, as well as running a music club for young people.